I heard a man on the subway the other day say the world was just falling apart. From a certain perspective it’s not outside the realm of possibility. Where I live, crime and traffic skew an otherwise lovely day. Rents are rising, salaries decreasing, and national politics are utterly and frighteningly bizarre. It’s either unusually hot or unusually cold, and whether climate change or blatant discrimination or impediments to a calm daily life, it’s not a stretch to realize most of these problems are at the hands of we fallible humans.

One-hundred and eighty-some years ago the Transcendentalism movement gave forth a window on humanity that professed belief in the innate goodness of people and their capacity to trust themselves and their potential. This faith in humanity and in unity with the natural world was a commentary and reactive movement to what the Transcendentalists saw as a deficient society, particularly noting crimes against humanity such as the treatment of the Native Americans and the continued existence of slavery

This appeal to one’s individual sense of ‘we can do better’ sought to raise the bar on self and national accountability. And almost 200 years later, it seems we could still enact and embody some of these virtuous philosophies of rectitude to counterbalance the fragility and damaging effects of being less than our best selves. 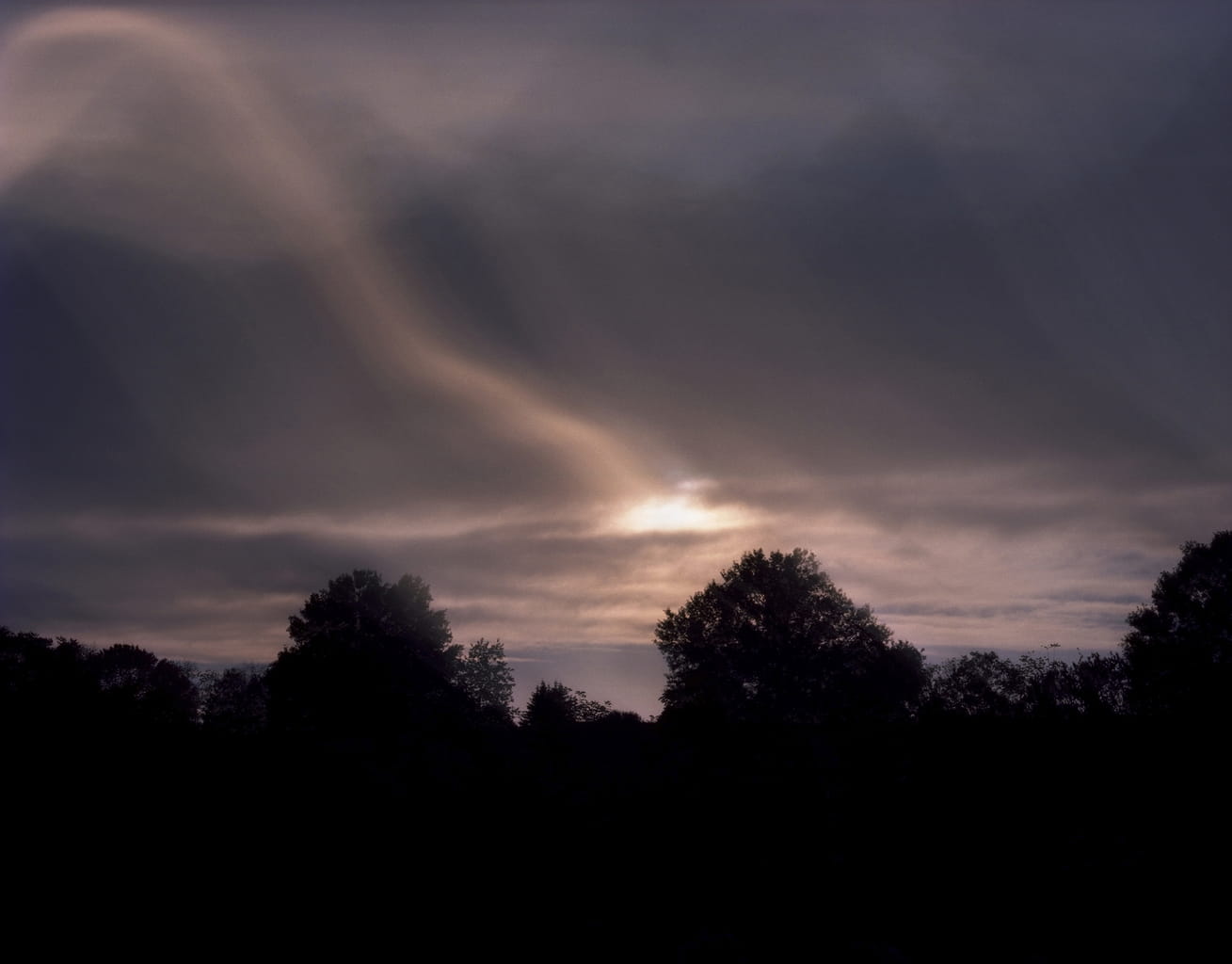 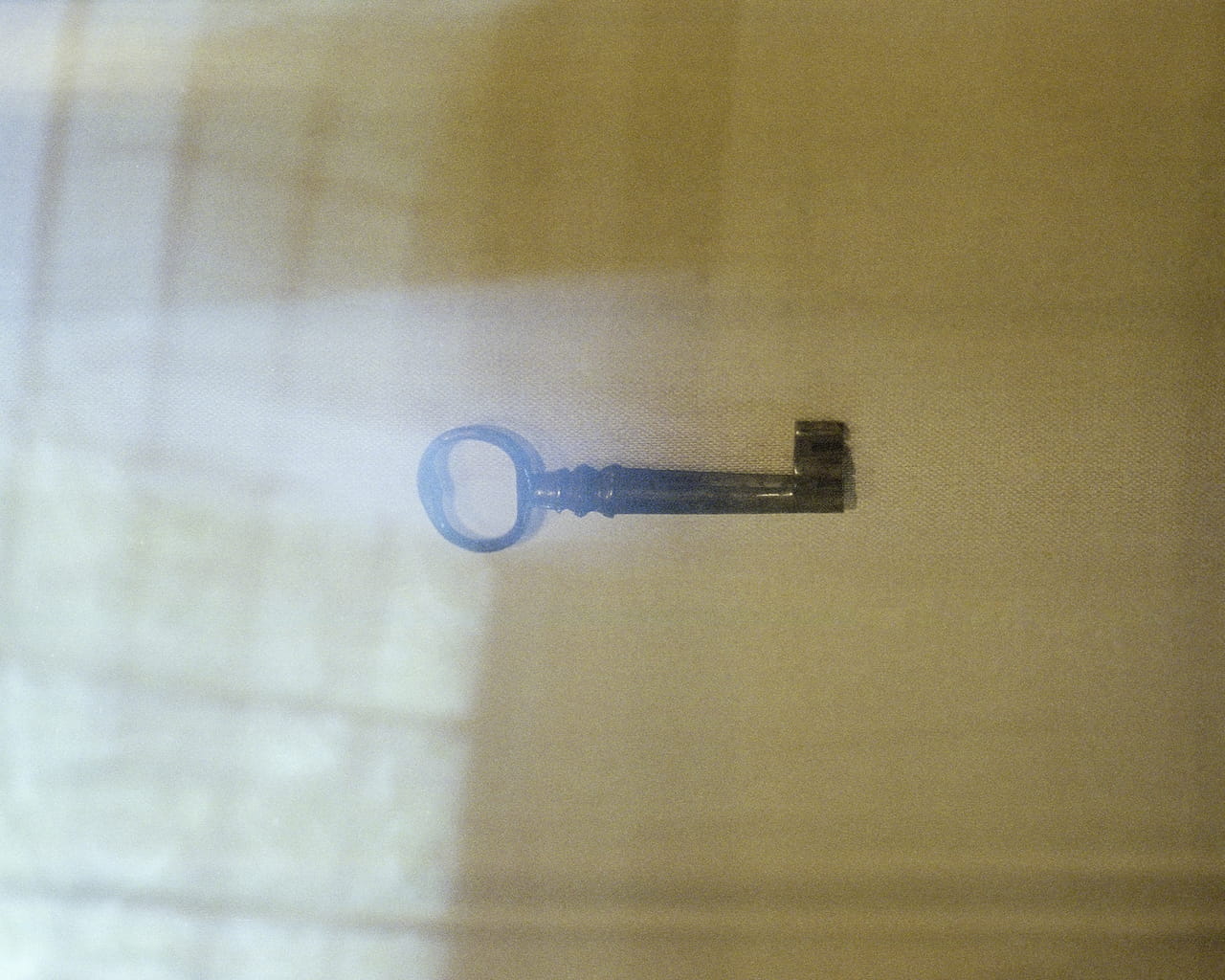 Key to Henry David Thoreau’s Desk, from the collection of the Concord Museum 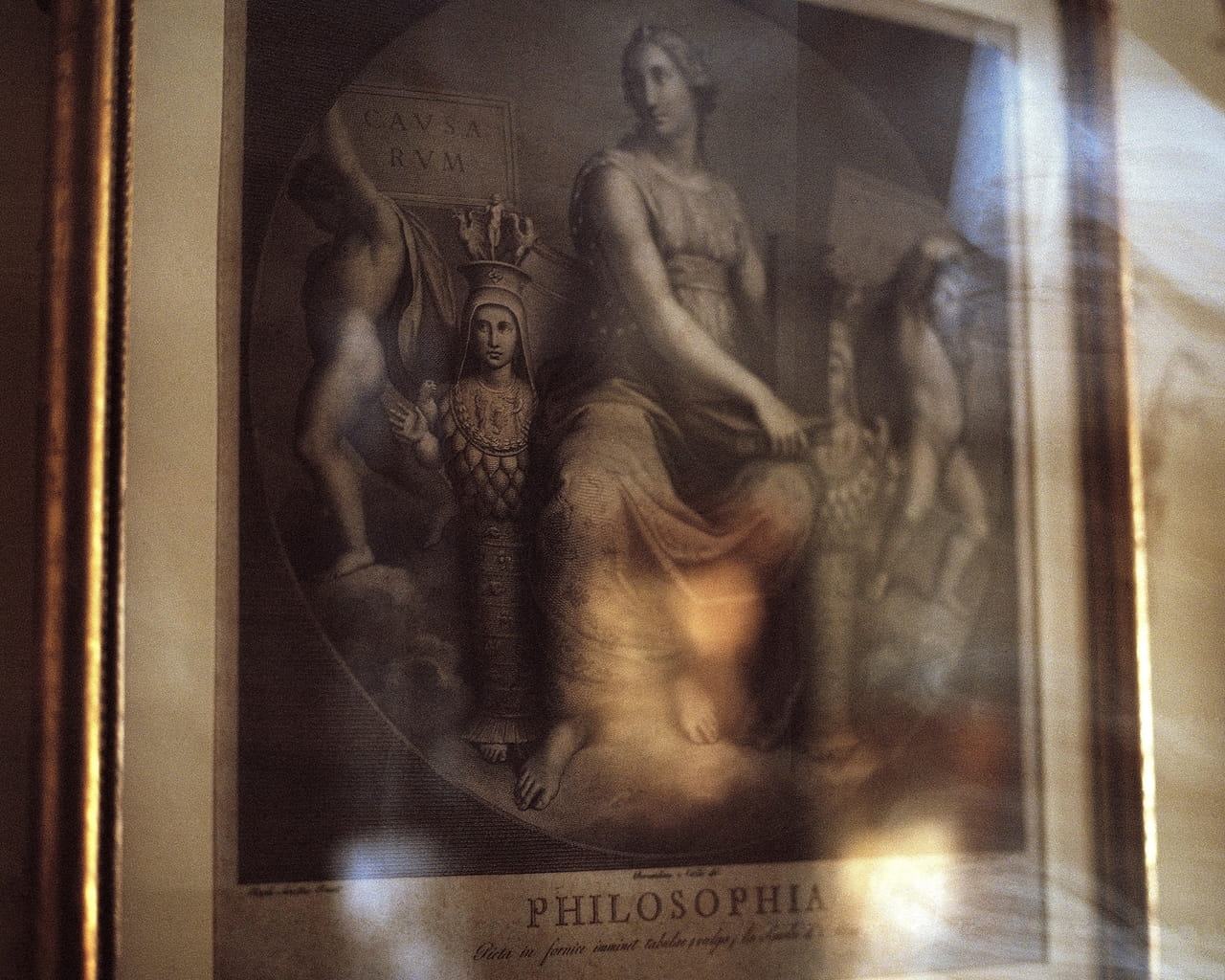 Inspiration is linked in some ways with what we need to get from it. If inspiration is a propulsion, it is also an exchange. The exhale of thought reaches the mind and also the heart of the inspired, resulting in a carrying forward of ideas or action reimagined. McCarty’s work achieves this, visual renderings of a time and place, immediate and current, yet suggesting the past. She achieves this in part through her play with long exposures and camera movement, enticing emotional content through abstraction of these literal spaces.

“The Transcendentalists believed in experimentation. Emerson and Thoreau both referred to life as an ‘experiment.’ Thoreau in fact uses the word ‘experiment’ 17 times in Walden. Knowing this, and with my personal aim to always unify form and content, it was crucial for me to develop a method for photographing the birthplace of Transcendentalism that mirrored the philosophy itself.  I didn’t want to make photographs ABOUT Transcendentalism, I wanted to see and capture images as a Transcendentalist today,” McCarty shares. 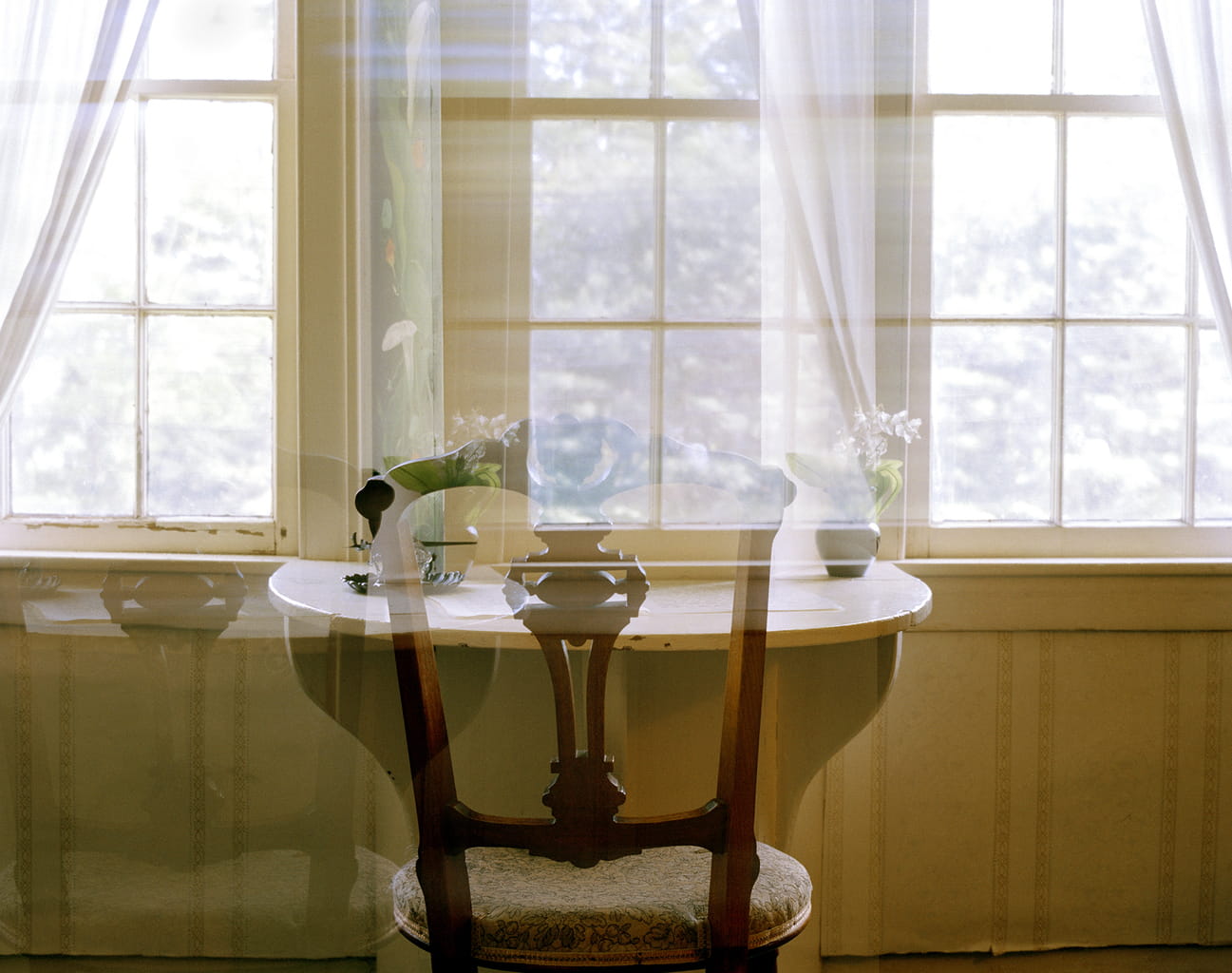 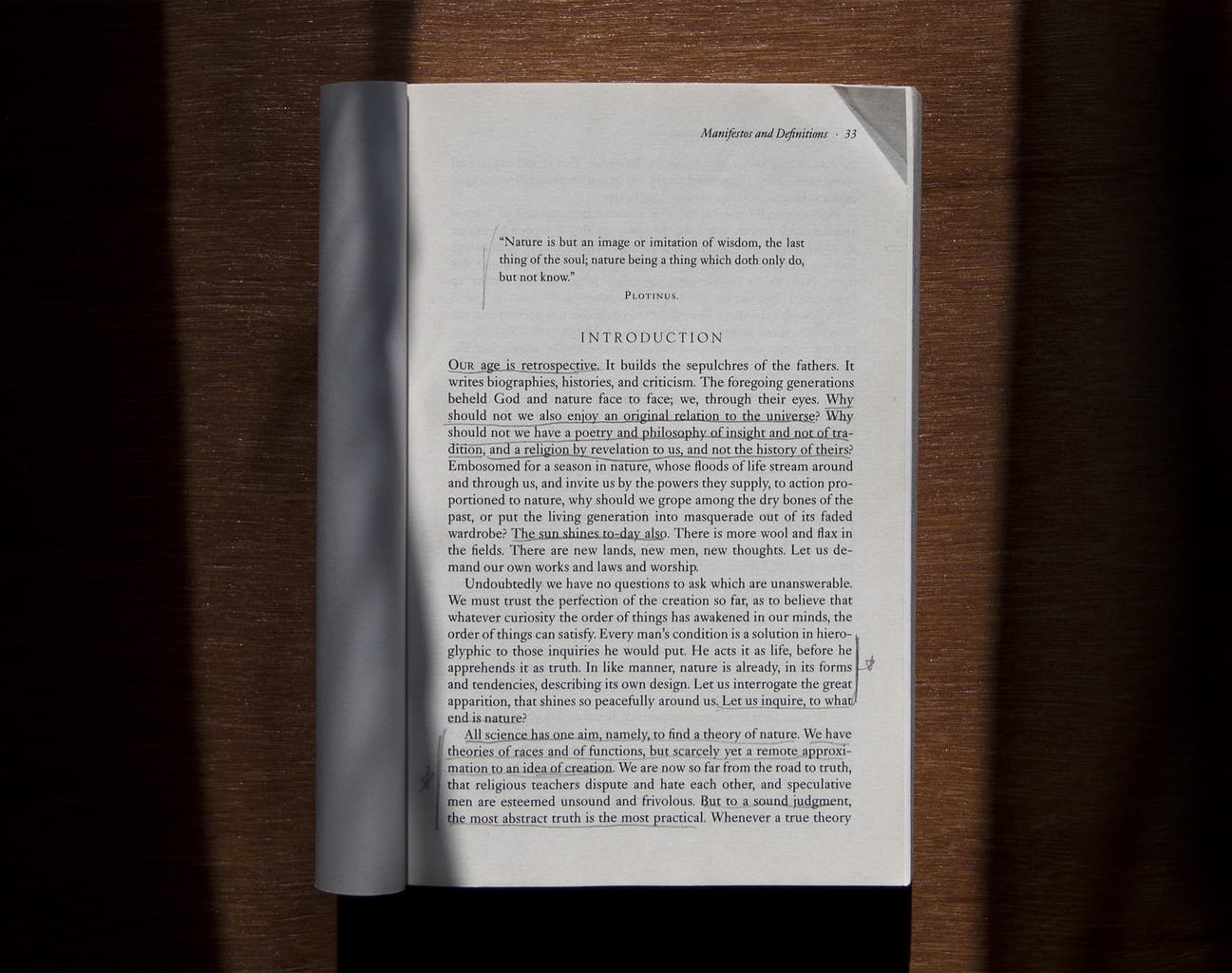 With that in mind, she set four ground rules for the project:

1. Photograph simply by traveling on foot and with a film camera

2. Photograph deliberately, seeking out specific places in Concord that are referenced in Transcendentalist writings

3. Photograph with reverence to the natural world by observing variations in the environment large and small in every season

4. Photograph experimentally by incorporating long exposures, camera movement (from photographing while walking), and embrace all mediations of light.

McCarty did not predetermine the imagery and worked to be present to what and how she’d see the Transcendentalist world with the parameters she set for herself. While deliberate in which specific arc of history and geography she wished to focus, she followed intuition for what happened past that, calling them “opportunities for discovery.”

She continues, “Sometimes that meant just spending a whole afternoon in a meadow and perhaps taking only one photograph or no photographs at all. At other times that meant shooting directly into the sun, or conversely, photographing the ground beneath my feet just because of an impulse. Or, it might mean making a long exposure indoors without a flash or tripod, even though my light meter said I don’t have enough light, just to see what would register on film. And I’ve found that by leaving myself open to uncertain results, in return I receive unexpected images that often embody my experience and the concept more fully than anything I could have planned.”

The emotional, and perhaps even primal, segues between self and place are evident if we’re paying attention. On a tangible level we feel differently in various landscapes, memories colliding with visceral physical reactions. Geographer Yi-Fu Tuan considered this beautifully in his seminal book, Space and Place, noting, “An Object of place achieves concrete reality when our experience of it is total, that is through all the senses as well as with the active and reflective mind.” And in a way, this summarizes McCarty’s project in its entirety.

Her process of immersion fed inspiration and as she writes, “…the process deepened my understanding of their written work. Even though the landscape of Concord is much different today than it was in the mid-nineteenth century, it is still possible to experience many of the natural phenomenon that Thoreau describes in Walden.”

Allowing the land to cue discovery, McCarty made a point to visit Concord in every season, noting light and weather shifts and registering those and their metaphors with her imagery. She selected specific sites to photograph as a starting point and then opened up to intuition partnering in the decision-making between photographer and camera. Leaving herself open to unexpected images allowed experience to become part of the concept itself. 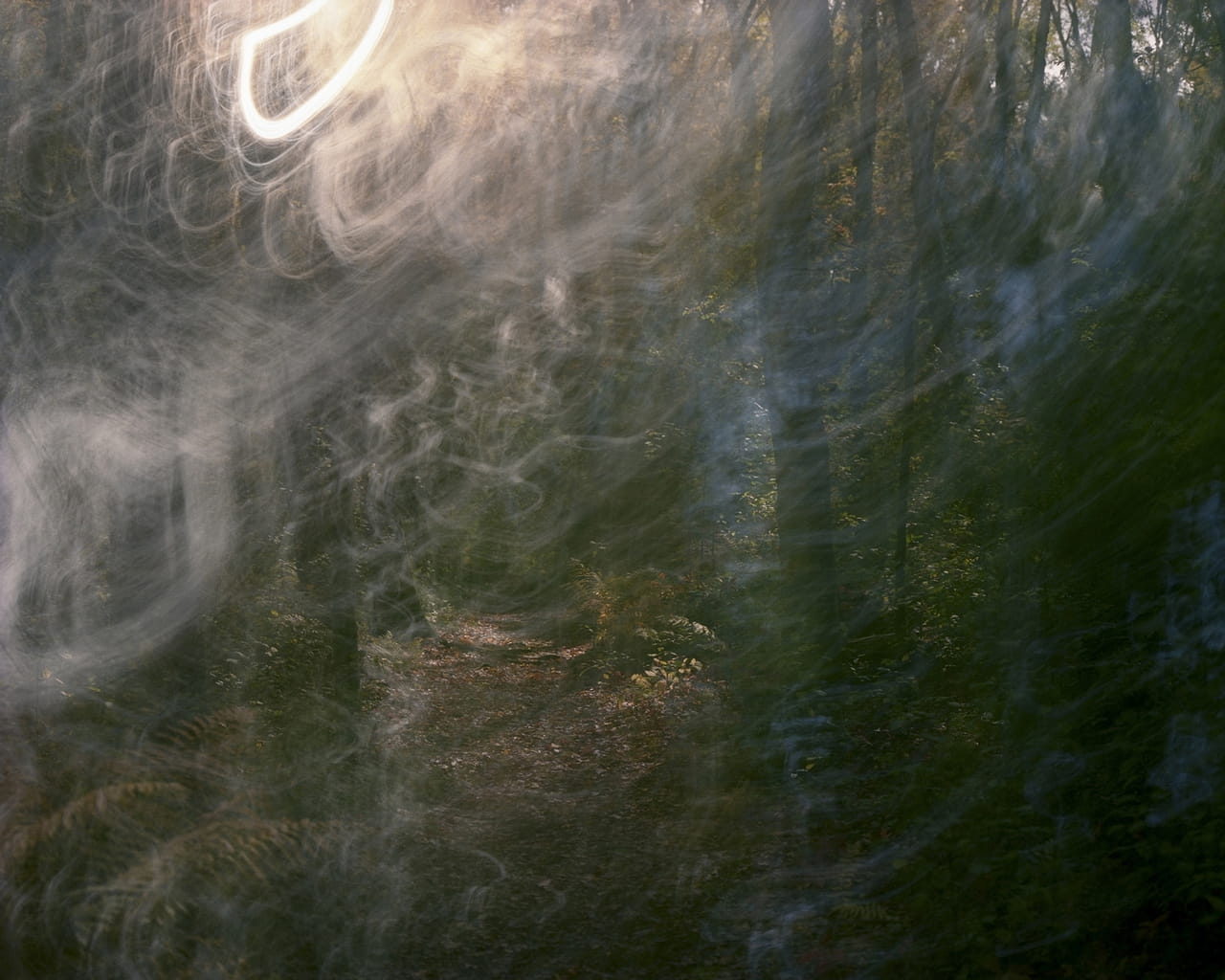 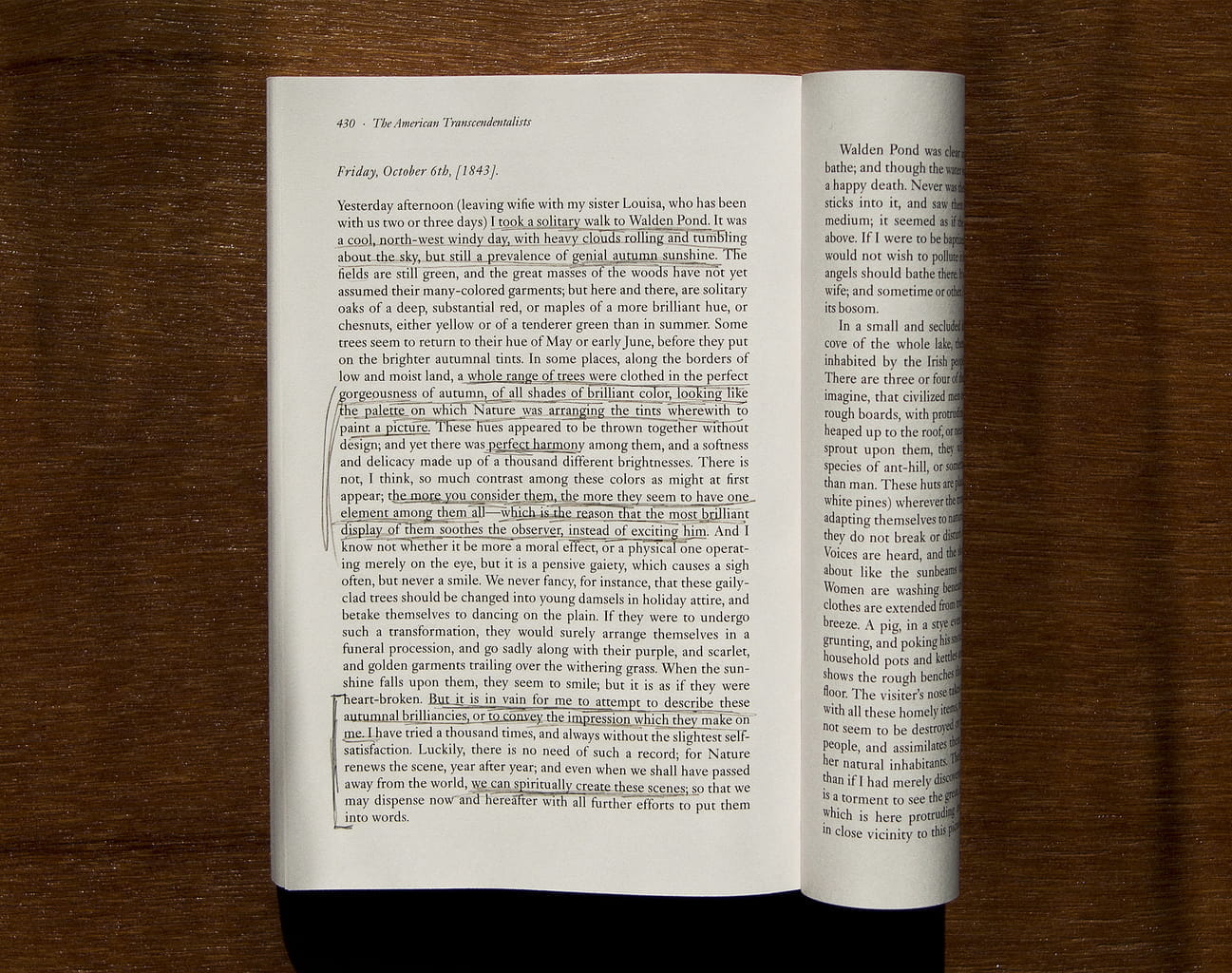 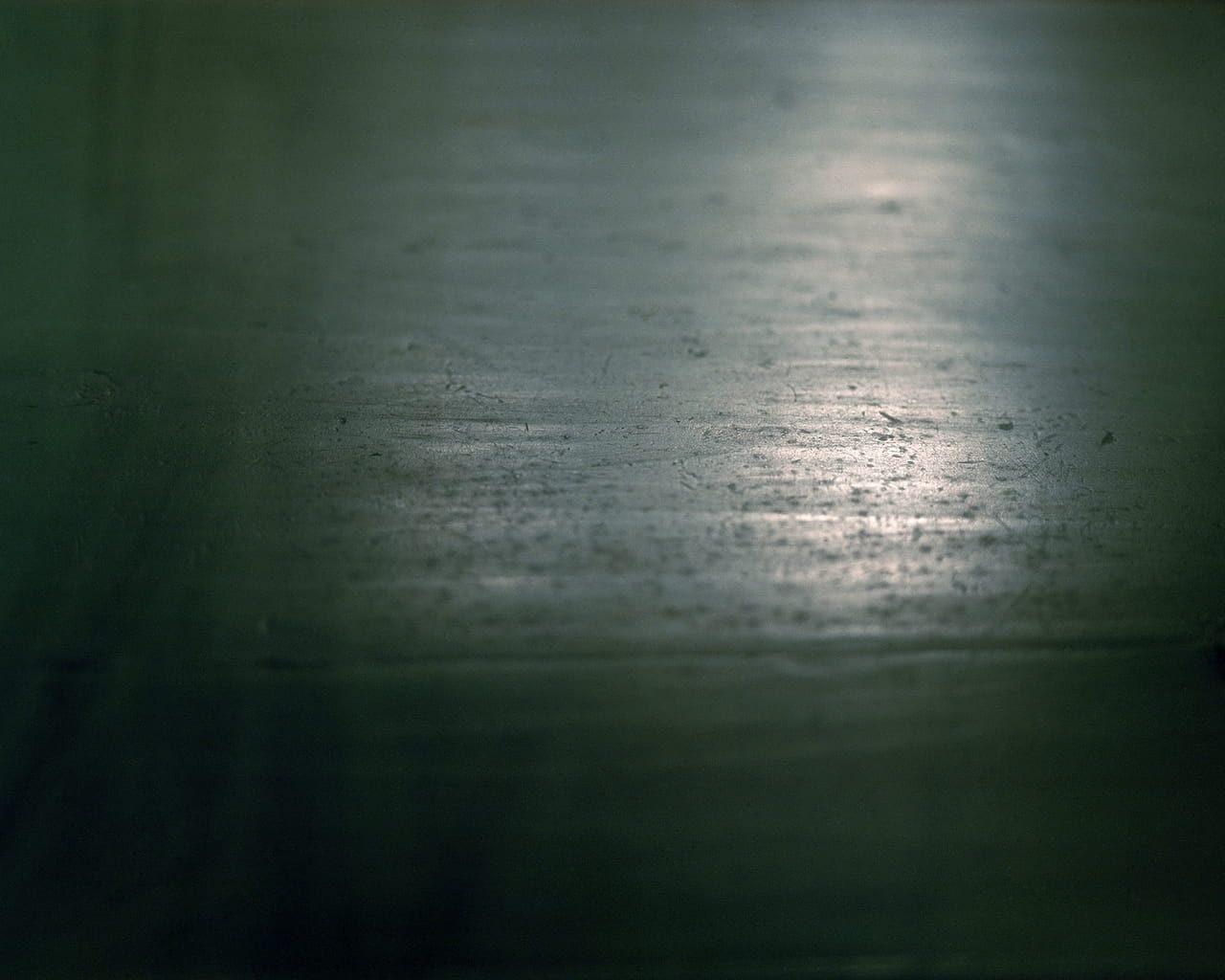 Henry David Thoreau’s Writing Desk, from the collection of the Concord Museum 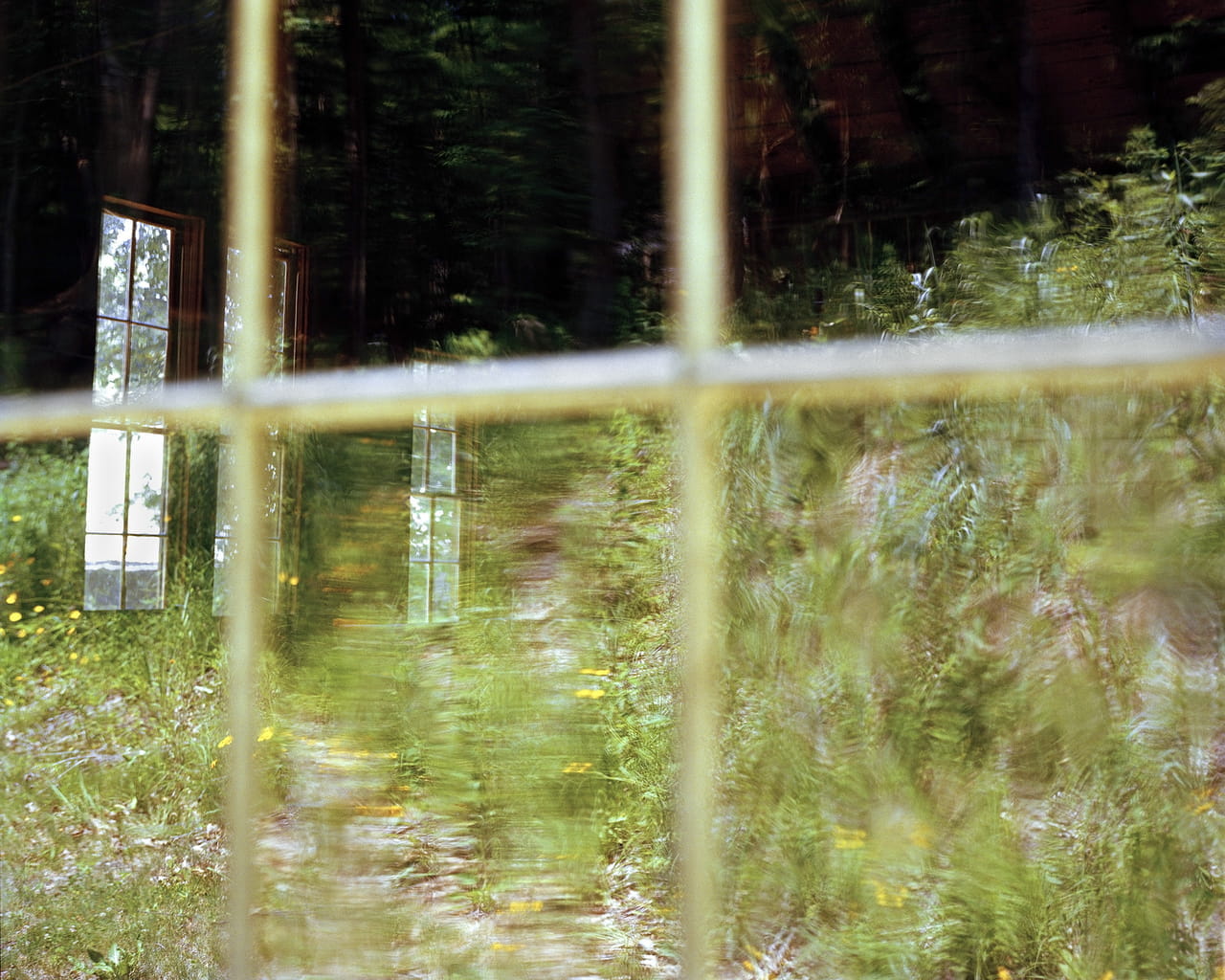 Window into the Concord School of Philosophy 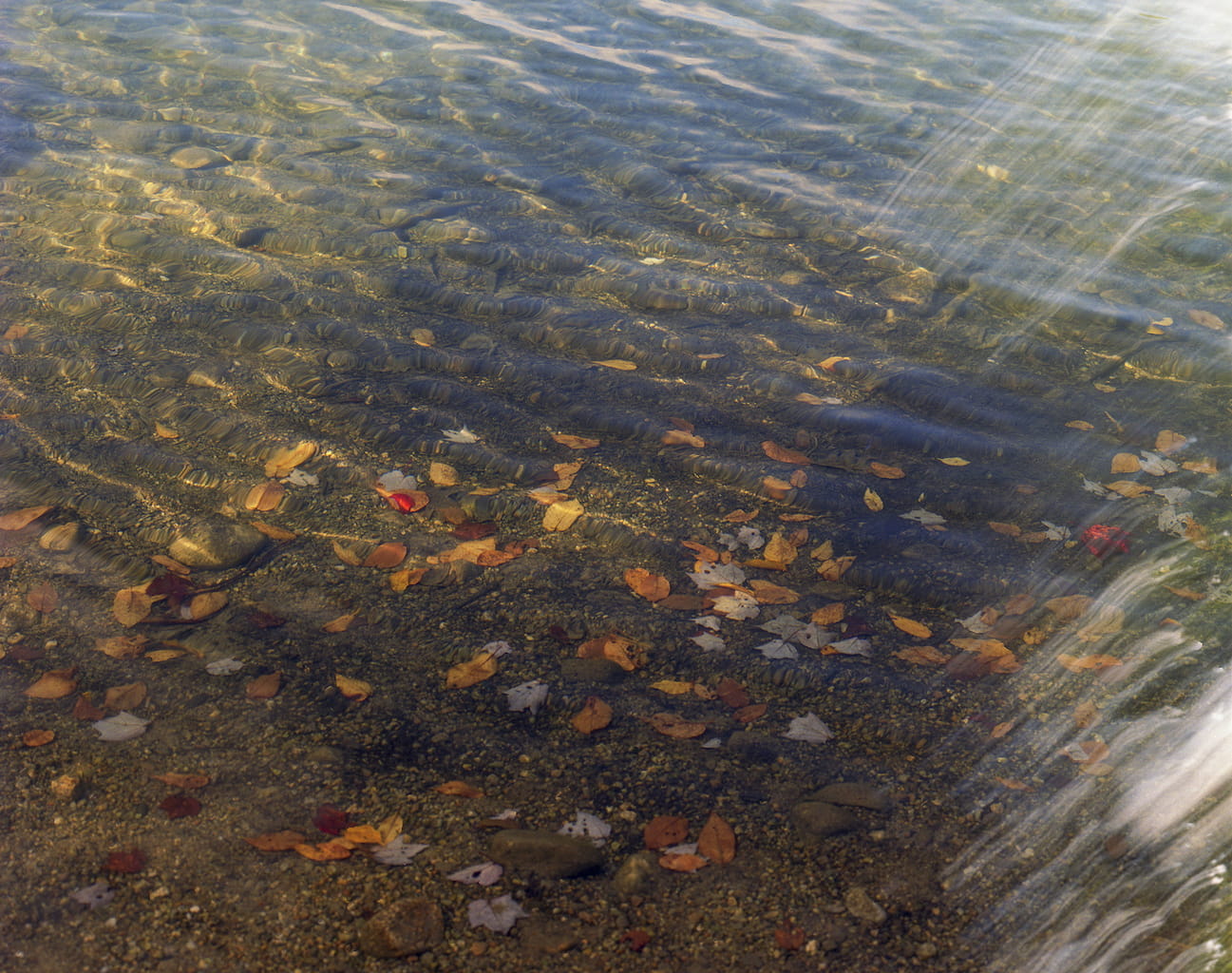 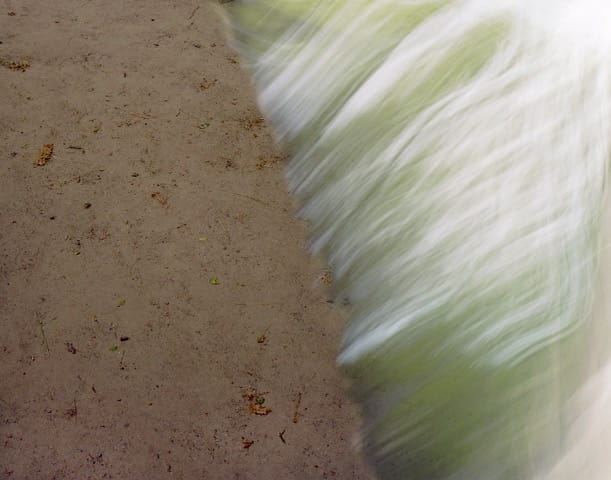 “If photography can make the invisible visible, it also has the capacity to make the intangible tangible. And what is less tangible than an idea, or philosophy like Transcendentalism?” she writes.

During her seasonal visits she always made a point to visit the Sleepy Hollow Cemetery where the Alcott family, Emerson, Hawthorne, and Thoreau are all buried. In discussing capturing the spirit of Transcendentalism in her images she notes an example.

“At first I just spent time there and eventually photographed their tombstones. But on my last trip I had the impulse to photograph the ground in front of Emerson’s tombstone. I made both a long exposure to see what an overexposed image would look like and then a “standard,” timed and light balanced exposure. And on the “standard” exposure I received the image [that made it into my book]. It looks like a double exposure, with half of the image in focus depicting the ground at the gravesite and the other half of the image depicts streaks of light and foliage emanating from the ground. Neither exposure I made on that day was a double, but that is the picture I received. It is a more fitting depiction of Emerson’s grave than any of the photos I made there, but I can’t explain how it happened.”

Progressive or radical thinking in any era is both reactionary and reflective, and in the case of the Transcendentalists of New England, its manifestation relied on both solitary consideration of the physical world and humans’ space in it, as well as writings, and regular discussions with each other to find meaning in observations and in turn shape beliefs. As McCarty shares, this group was interested in both their own relationship to nature, and also how they collectively affected each other and their surroundings. We tend to think of the camera as a literal tool, but for many it is a medium of abstraction, and McCarty utilizes photography well to create imagery steeped in history but presenting current considerations on culture and community. 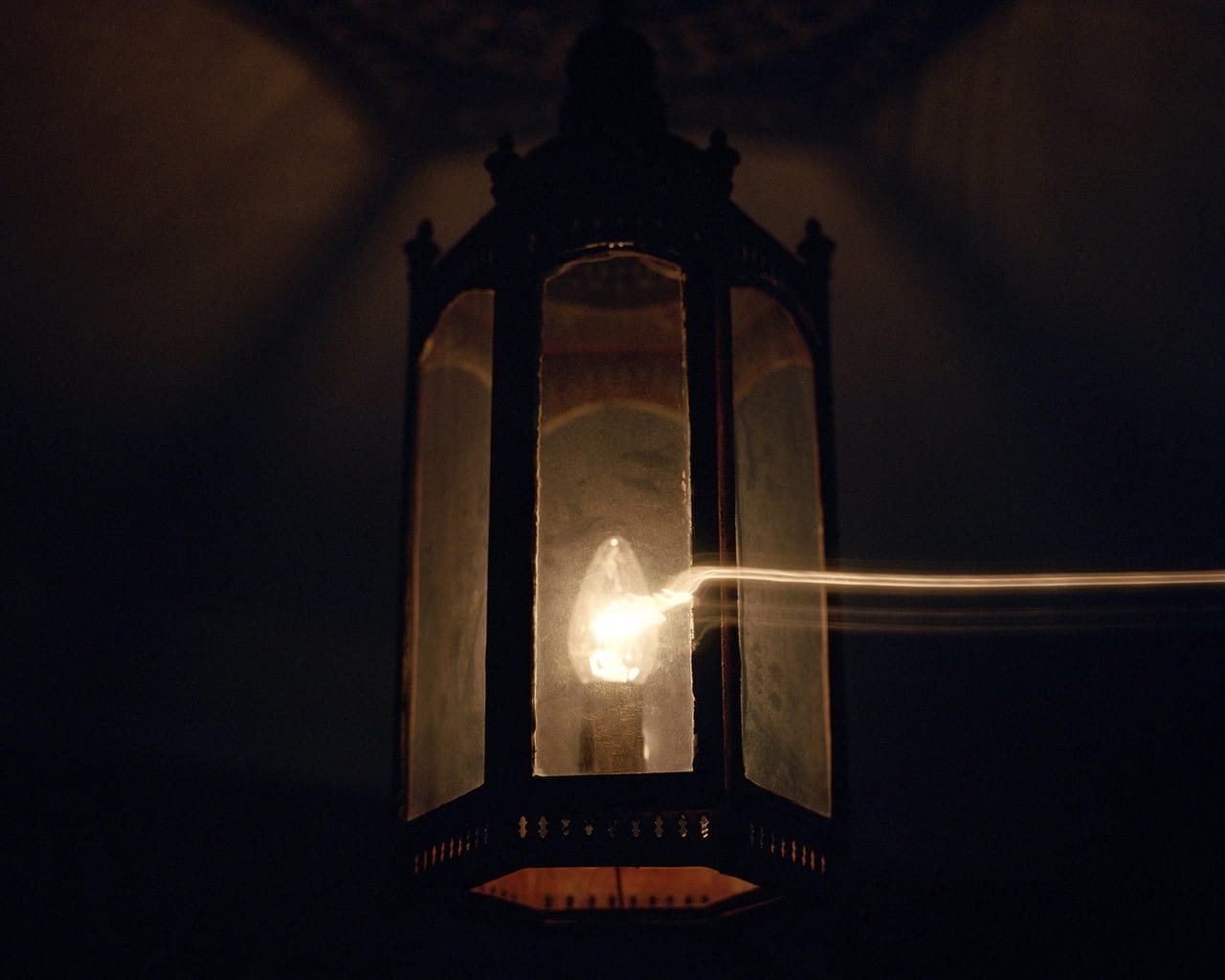 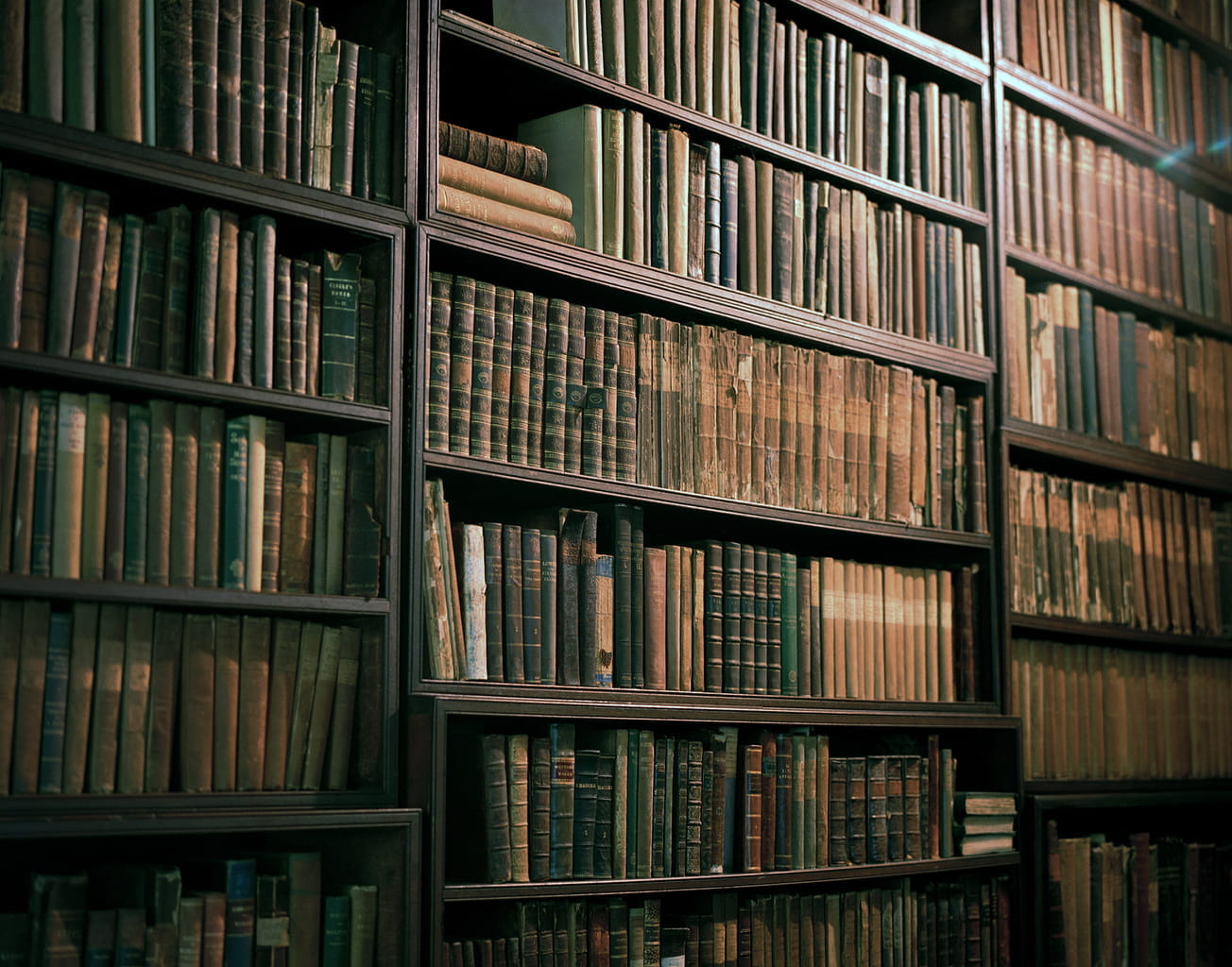 Emerson spoke of finding one’s own path, leaving a trail. And from there, those curious will notice, repeat the footfalls of those before, moving into different directions, exploring thought and reasons, watching autumn light move through leaf-shedding trees, finding meaning, eschewing reasons, like those before, and those to come. 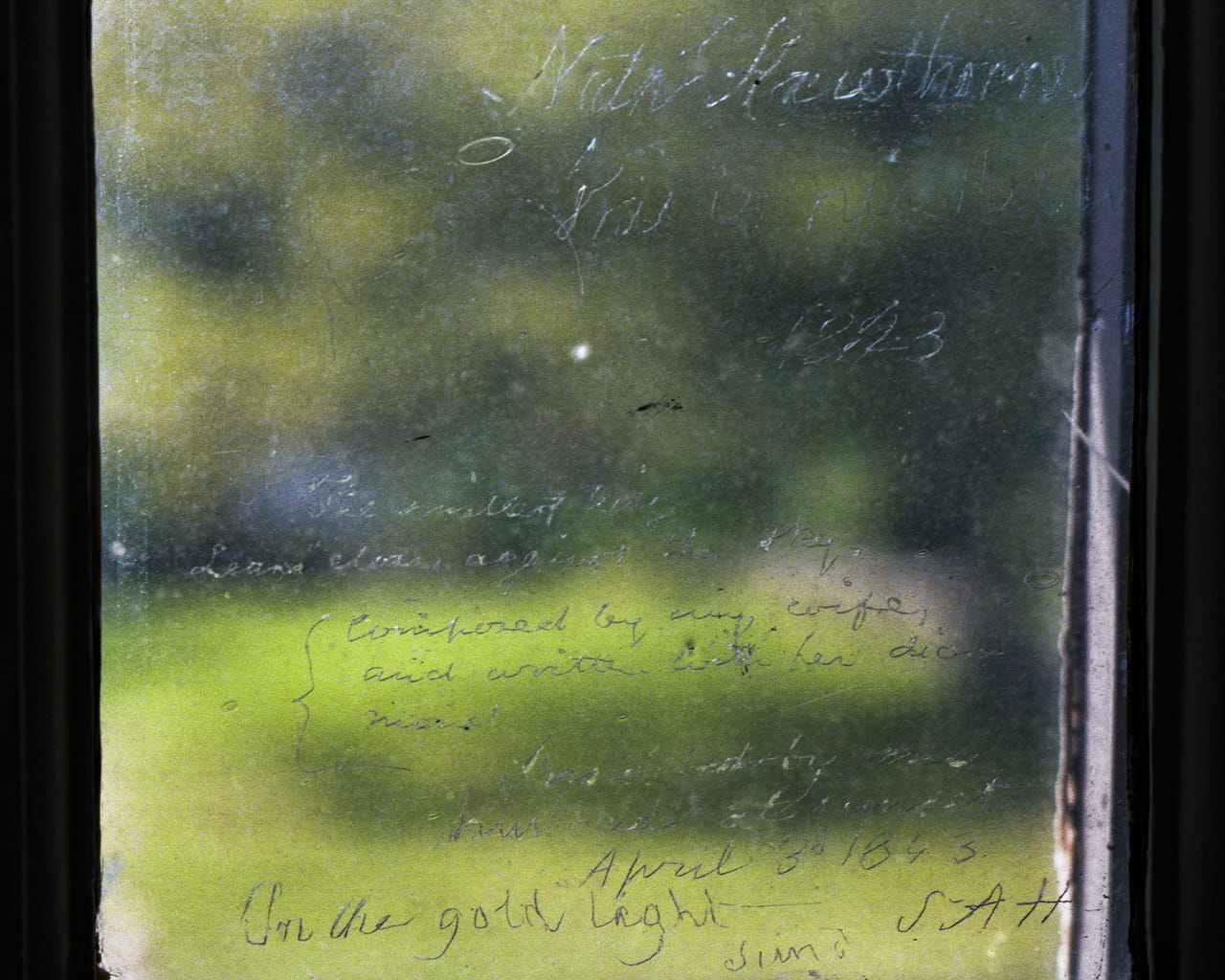 Lisa McCarty is an imagemaker, curator, and educator based in Durham, North Carolina.

Lisa has participated in over 60 exhibitions and screenings at venues such as The Carnegie Museum of Art, The Ogden Museum of Southern Art, Chicago Photography Center, Houston Center for Photography, Griffin Museum of Photography, Asheville Art Museum, and the American University Museum. Lisa’s photographs have also been shown internationally in Germany, Belgium, the Netherlands, Denmark, and Argentina.

Kirsten Rian is widely published as a journalist, essayist and poet. Her work has appeared in magazines, international literary journals and anthologies, and she is the author of two books.

Her newest book, Life Expectancy, was released in 2015. She has led creative writing workshops both domestically, as well as internationally in locations like post-war Sierra Leone and refugee relocation centers in Finland, and with human trafficking survivors, using creative writing as a tool for literacy and peacebuilding, and locally is a volunteer language facilitator for non-native speakers.